Birthday Parties and Shara Vs. Shower

So really it has been an uneventful beginning to my adventures in England with the exception of the title above.  Lets start with the birthday party.  So Mark works with this guy named Faz.  Faz has a wife, Penny and 2 girls, which he calls small child one and small child two.  I think that is hysterical!  The girls names really are Aimee and Tia.  So Monday I meet the girls for the first time.  We find out it is Aimee's 6th birthday the next day (Oct. 4) and so subsequently get invited to the birthday party.  So we go get a gift and I wait on Tuesday for the big event of my day.  Penny picks me up from the house and we go to get the girls from school.  Now I am trying to keep a low profile cause obviously I talk funny compared to everyone else and I don't like attention being drawn to myself.  (well here in the UK that is) Well that all got blown when the girls came running over to us when school got out.  I was like a celebrity.  Cracked me up!  I guess I do have an accent and all to them but these little girls...well are just the sweetest, cutest, adorable little girls with their British accents.

So we get in the car and they are singing along with all the popular radio songs...Lady Gaga and what not....I get the giggles because they know every word and are singing their hearts out.   They ask a million and one questions in about 2 seconds and they just were so excited that I was there.  So funny to me! The birthday party was fun, probably the most fun I have had since it was my own little kid birthday party.  They were dancing and opening presents and it reminded me of how carefree kids are and how absolutely wonderful their innocence and enthusiasm for life is.  Had a blast!  Thanks girls!

Now to Shara vs. Shower.  So the shower here is "new".  Meaning they didn't have one, yes you read that right, before now or got one pretty recently (last few years).  This shower is crap.  Very little water pressure...it is connected to the taps and has a little hose that runs up which is the "shower".  I am trying to keep an open mind about it but well...I like my serious water pressured showers.

So today get in...have my drip...drip...drip...shower.  Go to turn it off and it WILL NOT TURN OFF!!!  I think what the heck is going on here!  I try and try and nearly burn/freeze myself to death in the process.  I am at this point saying a few choice words and get out to grab my towel...water still running.  For the next  20 mins...no exaggeration trying to turn off the stupid thing.  Call Mark freaking out...of course doesn't answer.  As I go to put clothes on cause I think I am going to have to call someone to come over and fix this or at least find a neighbor to see if they can help ...when the thing goes off on its own!  Crazy right! 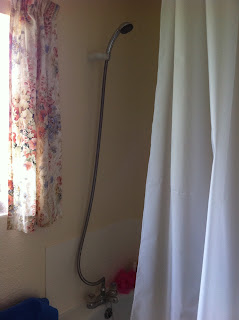 That is it for now.  Lovely curtains too right...that shall soon change!
Posted by Tetchner Times at 12:59 PM