So it has been 10 days...now 11 since I have updated "the" blog.  I was told this by my mother who I speak to regularly...she knows what is going on in my life but would just like to see it in the blog too.  Mom's are so strange sometimes and yet at the same time...I find myself being more and more like mine! Now that is truly scary!  (Just for you mom...I even save peanut butter jars to later use to make your salad dressing!....what have I become!)....anyways...

It has been busy here the past few weeks...not like the busy I was last year at this time...wedding planning getting into full swing, but busy none the less.  Christmas was chilled out...different than usual but good.  Boxing Day (the 26th) we went up to Mark's parents house and had more chill out time.  It mostly consisted of us sitting around watching full series of t.v. shows that different Tetchner's had gotten for Christmas.  Mark and I did make it down to the beach where we had gotten engaged last year.  Cool to go there exactly a year after he had proposed and see how crazy this past year has been as well as all the changes that have taken place.  It was a really good time! 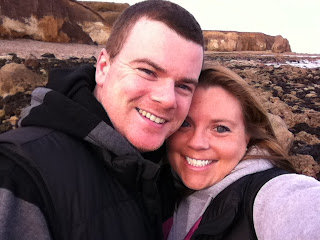 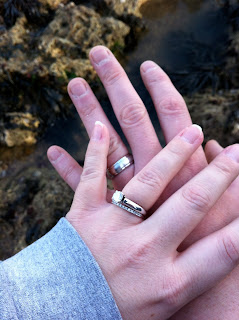 We left the Tetchner's on the 28th because early on the 29th we had to drive down to Heathrow (3hrs. one way) to pick up my friends Andrea and Nick.  It was SO good to see and hear people that speak "proper" English.  Although they kept telling me I was saying things funny and would get the giggles sometimes at what I said.  I don't think I sound any different but the hubby tells me my harsh American accent is softening...yeah whatever that means...I still sound as Chicagoian as they come.  But it was really great to be able to spend time with them.  We went to the castle and cathedral in Lincoln...and some other touristy type stuff.  NYE another friend from Chicago was here, Jessi and her boyfriend Nick.  So the 6 of us had a good night out ringing in the New Year. (Pics on NY Day post) 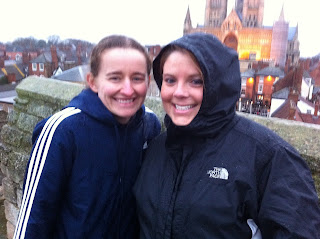 Andrea and I on the castle wall with cathedral in the background. 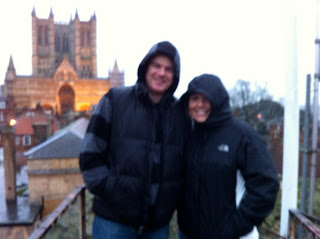 Same thing but with Mark 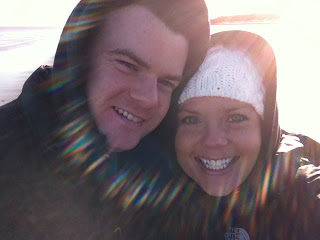 Thought the light rays were cool...on a beach in Mablethorpe. 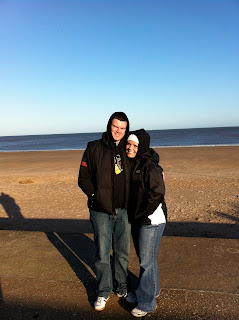 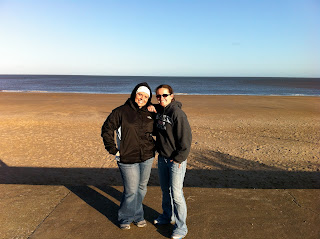 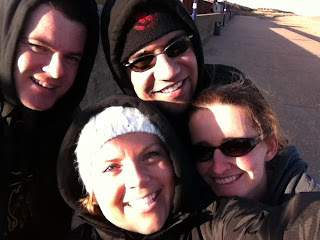 Sadly on Jan. 3 we had to take Andrea and Nick back to the airport.  You never appreciate how close Midway and O'Hare are until you make that 3 hr. journey one way.  They got back home safe and sound we got back into the routine of things here.  Mark went back to work on Wed. and somehow I lost track of time...wether cleaning the house or what not the week since then has just flown by.  There was a minor bleep on the radar on Saturday.  Sat. morning was my driving test here.  Now I had studied for it like I have never studied for a test before.  I could tell you just about everything there is to know about the rules of the road in Britain...but they have this hazard perception part.  Fine and dandy...I've driven now for 16 yrs....bring it on.
Well....not that easy.  I scored perfect on the multiple choice part of the test.  Yahoo!  But the hazard part is video clips.  In the clips you have to click every time you see a hazard.  If you click to much it thinks you are cheating and boots you out.  Well I got booted out on the first two clips.  There are 12 more but the issue is I have been a driver before.  I look ahead and see a hazard way before a new driver does.  It only gives you a small window to say it is a hazard.  My problem...I see it too soon and click before the computer says it is a hazard.  I don't see how that is a bad thing...it should be good that I see it before I have to take action but the computer doesn't grade like that.  So at the ripe old age of 31 almost 32 I failed my first test...EVER!!!  Lets just say I was a basket case the rest of the day...I didn't know what to do.  Maybe I should have failed something earlier in life to get that rejection over with cause lets just say it wasn't pretty.  Thanks to Mark I survived and booked another test.  But seriously...if I don't pass the next one I think the world might just end.  Ahhhh.....frustration.
This week so far consisted of taking down the Christmas tree, doing a boxercise class that has left me incredibly sore today, and washing clothes.  I know...what an exciting life I lead.
On a much more serious note...I do have a prayer request....My maid of honor, Rebecca's, little niece Courtney is about 2 months and a bit old.  She has gone to a bunch of doctors and they have been told that Courtney can't see.  They think it might be genetic DNA issues or a chemical imbalance.  They would really appreciate your prayers with what to do and where to go and the right doctors to treat little Courtney.  They haven't been told she is blind...and so they are just praying for a miracle.  I know God can to amazing things and so I am asking all of you to please pray for little Courtney and the whole DeHoog family.  I know they and myself would really appreciate it.  Thanks!
And with that...I will put a few pics up and call it a day. Peace I'm out.
Posted by Tetchner Times at 12:16 PM