So it has been an interesting week or so.  I am excited that the end result will be better, new, safe and secure windows and doors to our house and a new gutter system...however...the process ANNOYING!  They have been drilling our house, banging and really who knows what for the past week!  It is like living inside a construction site!  I hate it.  The t.v./ Internet goes out every other minute not to mention the power.  So frustrating....but like I said we will have nice new windows and doors when it is done so I guess I can't complain too much.  There will be pictures attached at the end.  Other than that I have been doing the usual...not much, yet staying busy.  This weeks grocery store shop was much more successful than the last...pin number remembered and all is well.  Driving is going well too.  I love my new found freedom.  Although last week I was used as a taxi service to take the boys in to work.  They had been out all night for one of their co-workers leaving party.  Lets just say I am glad I drove them in and that they didn't get behind the wheel of a car to go to work Friday morning.  It was amusing to say the least...funny enough they were all named Mark.  3 Marks and 1 Shara.  I got the good wife of the day title and was treated to a nice dinner later on...so hey...I can be a taxi service anyway if I get good food cooked for me at the end! 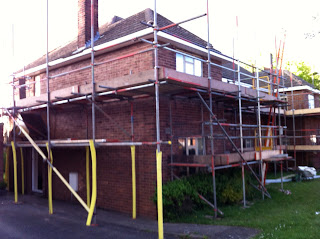 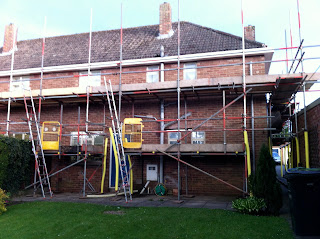 This past weekend Mark along with his friend, the best man at our wedding, Daz and another guy he works with Zac, did a HUGE bike ride.  They were signed up to do 75 miles but the course got changed last minute so they only wound up doing 63miles.  I say "only" cause it makes Mark go crazy "...only...only...you do 63 miles..."that is his response lol.  Makes me giggle.  Anyways...they had a good time and finished which is the main thing!  Gemma, Daz's wife, came down and so we hung out in town while the boys were riding.  Much more my idea of a nice Saturday afternoon, ya know, sitting at Starbucks rather than pedaling but to each their own.  Gemma is the best!  She is someone I feel like I have known my entire life but haven't.  It is so nice to find a couple where I like Gemma as much as Mark enjoys Darren's company.  We are really so much alike...so it is nice to just spend time with them and laugh at each other.  Good times! 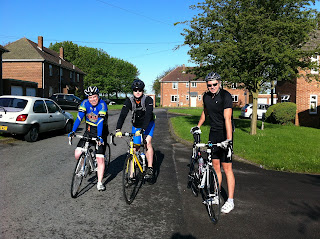 Daz (Darren), Mark in middle, Zac in all black.

The most important news I have is that I will be home in less than a MONTH!!!
OOOOOOO I am so excited!  Officially 29 days now but who is counting....oh yeah that's right me! lol  Looking forward to seeing a lot of you whether it be at church or some other event!  You might want to start making reservations at your local restaurants since I think I might be hitting one up every night I am home.  Oh...American food how I have missed you!  So just a heads up...Jimmy John's get your #4 sandwiches ready, Portillo's your beef, Panera your half Cesar salad half french onion soup, and Starbucks your ICETEA!  Cause I am coming!!! LOL Just a bit excited.  So that is that.  Hope to see you all soon!  Over and Out x

OH!  I almost forgot...the Peacock!  So we come home from town Sunday with Gemma and Darren and this is what we have in our drive.  A PEACOCK!  What on earth!  Literally was like less than 5 feet away from it.  Went to feed it some bread and it ruffled its feathers and kind of lunged forward.  I screamed and ran in the house. lol  But of all the things...a peacock on our drive.  Only in England... 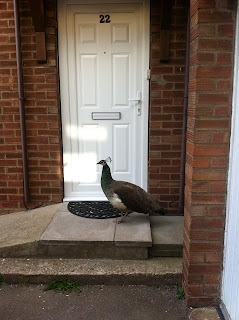 Posted by Tetchner Times at 2:07 PM